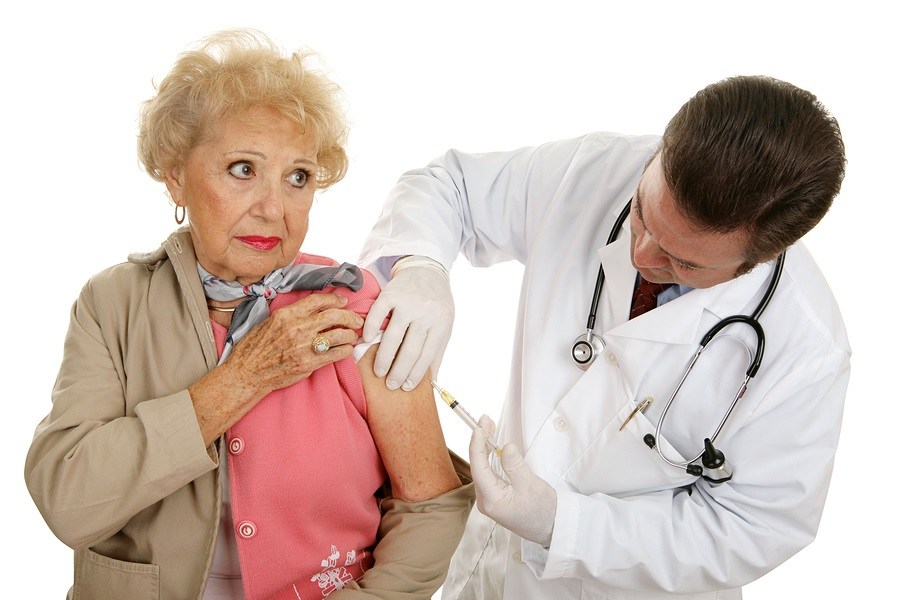 by Kate Raines
The Vaccine Reaction

It has been long recognized that elderly people do not respond well to vaccination as a whole and that their immune responses to annual influenza vaccinations are especially weak. The elderly are at higher risk for serious complications from infections like influenza and pneumonia because aging immune systems often do not mount a robust response to challenge from natural pathogens or vaccines.

The number of Americans over age 65 hospitalized for influenza in the 2014-2015 flu season was higher than had been previously reported since government health officials began to collect the data in 2005.2 Regardless of the highly questionable therapeutic value and potentially harmful side effects of the influenza vaccine, public health authorities insist that the annual flu shot is the best defense there is for seniors.

It is not a new finding that the flu shot provides little benefit to aging populations. Public health officials have known for many years that analyses of influenza vaccine effectiveness repeatedly reveal the vaccine often does not prevent influenza or influenza complications among the elderly.3 4 [And it is important to remember that the annual flu shot only protects against three to four strains of type A or type B influenza and does not prevent other viral or bacterial infections that cause respiratory symptoms and deaths from “influenza like illness.”]5

Influenza vaccination rates in the 65+ age group rose from approximately 15% in the 1960s to 65% in the 1980s, while  mortality from influenza infections among the elderly in response to increasing vaccination rates has continued to climb.3 Unable to accept that the flu vaccine does not protect the elderly, in 2005 the National Institutes of Health (NIH) set out to prove “once and for all” that other factors must be obscuring what they were sure was a significant benefit of the vaccine. The study backfired on them when results confirmed that flu-related death had increased since routine vaccination of older Americans became widespread.4

In that study published in 2006, NIH researchers reported that…

The researchers explained this discrepancy by pointing out:

… the sharp decline in influenza-related deaths among people aged 65 to 74 years in the years immediately after A(H3N2) viruses emerged in the 1968 pandemic was most likely due to the acquisition of natural immunity to these viruses. Because of this strong natural immunization effect, by 1980, relatively few deaths in this age group (about 5000 per year) were left to prevent… together with the flat excess mortality rates after 1980, this suggests that influenza vaccination of persons aged 45 to 74 years provided little or no mortality benefit beyond natural immunization acquired during the first decade of emergence of the A(H3N2) virus.5

In 2006, veteran reporter Sharyl Attkisson interviewed Dr. Tom Reichert, the only government-independent co-author of that study (i.e., the only one allowed to go on record). Dr. Reichert explained they had set out fully expecting their investigation would prove that influenza vaccines helped prevent death from influenza in older adults but that they were, instead, “astonished” to discover this was not the case.6

In 2009, the FDA licensed influenza vaccines for those over age 65 that contain four times as much antigen as flu vaccines for other age groups in what has turned out to be a failed attempt to hyperstimulate immune responses in the elderly to confer protection.6 7When that did not do the job, in September 2015 an FDA vaccine advisory committee voted to fast track the licensure of flu vaccines that contain squalene, a controversial oil in water vaccine adjuvant linked with serious reactions that can produce chronic inflammation in the body, including autoimmunity.8 9 10

Other Options for Preventing Influenza in Elderly

Given the evidence that influenza vaccinations have long failed to work for older people, especially those in fragile health living in long-term care facilities or nursing homes, as winter approaches it is useful to look what happens to the aging human immune system and how natural immunity can be strengthened to help vulnerable elderly populations stay healthy during the “flu season.”

There are two ‘branches’ to the immune system:7 8 9 Innate or cell mediated immunity refers broadly to the “first responders” that meet the challenge from an infectious microbe. The innate system response is comprised of several stages, including surface-area physical barriers (skin and mucous membranes), which defend against infectious microbes that enter a cut, for example; inflammatory responses that involve production of white blood cells and specific enzymes; and natural killer cells that search for cells that have undergone changes they recognize as undesirable.

The second branch of the immune system induces humoral or “learned” immunity. It is related to the body’s ability to mount an appropriate antibody response to infection by a specific pathogen and to remember how to defend against that “enemy” in the future.

The workhorses in stimulating inflammatory responses and resolving inflammation to acquire humoral immunity are the “naïve lymphocytes,” essentially blank slates that can respond to any of the host of foreign antigens encountered over the course of a lifetime, and the “memory lymphocytes,” which recognize and respond to antigens they have been exposed to previously.

Several age-related changes, which interact to diminish robust immune responses by the elderly, have been described as “immunosenescence,” a term coined by Dr. Roy Walford. A recognized and highly regarded pioneer in the study of how the body ages,10 Dr. Walford has written about those natural changes.

He explains that, first, the innate cell mediated immune response as we age becomes slower and doesn’t produce as many general-defensive cells. Lung tissues and blood vessels in general become less flexible, so the body can’t as easily effectively deal with challenge from infectious microbes.

But inevitable changes in the learned humoral immune response really tips the balance for older adults. Both the number of naïve lymphocytes being produced and the functionality of the memory lymphocytes begin their gradual decline soon after puberty, but the changes don’t significantly impair functional immunity through most of adult life. According to another expert on the aging immune system, “Only in the late phase of life does the progressive decline of immune function create vulnerability, with a resultant increase in morbidity and mortality due to infection in the elderly.”11

With fewer and more sluggish fighter cells effectively lowering the body’s ability to respond to challenges from both previously encountered and newly encountered microbes, the aging immune system is unable to mount enough of an appropriate inflammatory response and resolve it to achieve either natural or artificial vaccine induced immunity. This means older adults can be at much higher risk of complications from natural infections and vaccination.

The influenza virus is constantly changing, sometimes rapidly, another reason why the elderly are so vulnerable to serious effects of influenza. Scientists recognize that flu vaccines do not work well against a more virulent influenza A H3N2 strain, which unexpectedly predominated during the 2014-2015 flu season.12

It isn’t hard to understand the pharmaceutical industry’s push for annual flu vaccination for everyone, whether it works or not: There’s a lot of money in the flu vaccine business. And public health officials seem to believe “even a little protection is better than none,” but it’s not like we are talking about a product that is completely free of side effects.

Both inactivated and live virus influenza vaccines are associated with serious adverse reaction reports in the medical literature and in the federally operated vaccine adverse events reporting system (VAERS). The public can search the VAERS database to read descriptions of influenza vaccine reactions here.

The influenza virus is a constant presence, but influenza infections and outbreaks are primarily identified in late fall and winter. There are many hypotheses offered to explain why influenza appears to be more prevalent in the colder months, including improved stability of the virus in lower temperatures; reduced blood flow to mucous membranes during colder weather; indoor crowding; increased survival time for the airborne virus in low humidity, and a correlation between dry heated air and viral transmission.13

Many health care providers endorse the use of cool air humidifiers during the flu season, as moisturized air is thought to make it harder for influenza viral particles to circulate and be transmitted. Clinical EFT practitioner and nutritionist Valerie Burke, MSN champions her “fabulous five”: Vitamin D3, probiotics, green tea, elderberry (Sambucus nigra), and Echinacea, all of which have evidence for supporting healthy immune function.14

Influenza infection may not always be avoidable, but taking steps to strengthen our immunity to improve the odds of moving through an influenza infection without experiencing serious complications can help us avoid irrational “fear of flu”—no matter what our age. It is a fear that is encouraged by the pharmaceutical and medical trade industries to persuade us to believe that reliance on the ineffective influenza vaccine is the best way to stay healthy during the flu season, especially for the elderly.

Read the full article at The Vaccine Reaction.