[vc_row][vc_column][vc_column_text]When Mahatma Gandhi visited Khwaja Abdul Hamied, founder of the Chemical, Industrial and Chemical Laboratories in Mumbai in 1939, Hamied’s son Yusuf was barely 3 years of age, and has no recollection of this exalted occasion. Today, as Non-Executive Chairman of the company now known as CIPLA, Yusuf Hamied keeps a close watch on his family’s generic drugs giant, which turns over US$2 billion annually and employs around 26 000 people in India and several other locations worldwide. “We are big on volume, but low on cost. If we sold our drugs at US prices we would be fi ve times larger than Pfi zer”, he says.

Despite his business acumen and personal wealth, Hamied talks passionately about his lifelong crusade to ensure that pharmaceuticals are accessible and aff ordable to all. His genius, and CIPLA’s success, stems from his mastery at reverse engineering of patented drugs, in particular in reformulating the active pharmaceutical ingredient. “Our R&D at CIPLA is targeted at incremental innovation, how to change and improve a product that already exists”, he explains.

A talent for chemistry took Hamied to Christ’s College at the University of Cambridge in the mid-1950s, where Alexander Todd, later a Nobel Prize winner, was a huge infl uence. After completing a PhD in natural product chemistry, he returned to India in 1960 and started work as a development offi cer at CIPLA. “The 1960s was a tough decade for the pharmaceutical industry in India”, he recalls. “We were still operating within the British patent law of 1911.” As a result, Hamied helped establish the Indian Drug Manufacturers’ Association, which lobbied the Indian Government for a change in patent law. At this time he also began to lock horns for the fi rst time with the multinational pharmaceutical companies: with Beecham’s over CIPLA’s attempts to produce a generic form of ampicillin in 1967, and with ICI over the β blocker propranolol. Yusuf’s campaigning was eventually successful, with India changing its laws on drug patents in 1972. From then on, patents could be applied only to the processes involved in producing a pharmaceutical product, not on the product itself. And so began, in Hamied’s own words, “the golden era for Indian drug manufacture”.

While Hamied and CIPLA gained increasing recognition for their generic drug output, and their courage to challenge multinationals over patent disputes, it was Hamied’s defi ance against the multinationals over access to aff ordable antiretroviral therapies for HIV that has become folklore. In September, 2000, Hamied spoke at a meeting of European Union Health Ministers and Chief Executives of major pharmaceutical multinationals, and quietly dropped a bombshell: he proposed plans for producing a generic antiretroviral cocktail for around $800 per person per year, a fraction of the $14 000 being charged by the multinationals. He was received with a deafening silence. The media came to Hamied’s rescue. In February, 2001, news about Hamied’s proposals to give aff ordable access to antiretrovirals—and now at only $1 a day—became front-page news. Before long, and with international support at many levels, Hamied was overseeing CIPLA’s production of the triple fi xed-dose combination Triomune, and its distribution within India and to overseas markets in Africa. David Heymann, Professor of Infectious Disease Epidemiology at the London School of Hygiene & Tropical Medicine, has worked closely with Hamied in the HIV fi eld and says: “Speaking with Yusuf— with an almost mischievous twinkle in his eye—provides a look into the mind of a compassionate innovator who has clearly made a diff erence to the lives of those who need health care the most. He is an example of the good that comes from unwavering persistence to a vision; a vision that has led to aff ordable life-saving HIV medicines—a game-changer in the global fi ght against AIDS.”

In 2005, India reintroduced product patents and backdated them to 1995. “I am still seething about this, how can you backdate knowledge and have retrospective patents?” Hamied says. “And I want to make this very clear, despite what the multinationals say, I abide by the laws of the country in which I do business. I am not against patents, I am against monopolies”, he says defi antly. Hamied believes that a change in Trade-Related Aspects of Intellectual Property Rights (TRIPS) is urgently needed to create a more equitable environment for producers of generic drugs to operate within markets in low-income settings. “We had a model that once worked, Canadian Bill S91. The concept was simple—allow generic manufacture anywhere with a payment of a 4% royalty to the parent manufacturer/inventor. It is of the upmost importance that we revisit this model for the future of low-income drug markets”, he says. And what of the role of CIPLA in the global fi ght against antimicrobial resistance, the subject of a new Lancet Series? As a manufacturer, Hamied sees new ways of altering existing antibiotics that could foster better access to more appropriate therapies, including the use of newer antimicrobials, the use of older and newer drug combinations, and the use of drug enhancers. ”For CIPLA, our future role will be to provide aff ordable generics of the most useful antibiotics and to get them into areas where local manufacturers may struggle to meet the quality standards that are required internationally”, he says. And Hamied’s own future, as he approaches his 80th birthday next year? “As long as I can contribute positively to CIPLA, both scientifi cally and commercially, I will continue to serve the company, and my country”, he says. 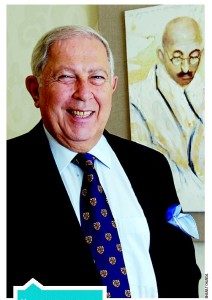